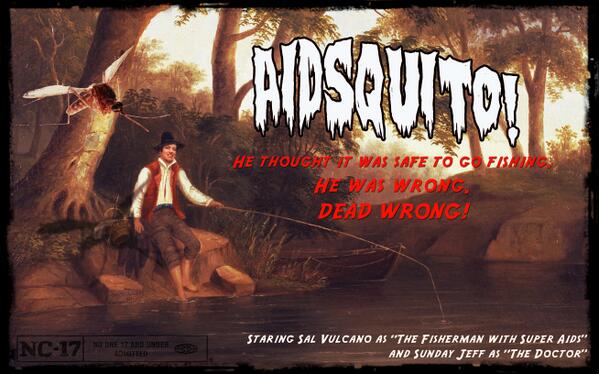 Fat news, Puss hole of the week, Q is outed as a sodomite.

“Once you have your genitals out, you’re done” -Walt

“He hasn’t helped himself with his nonsense, sometimes it’s almost indecipherable what he’s talking about” – Walt

Pusshole of the Week:  Perry Beam is aghast at an Obama rodeo clown

People are clamoring for Bry to make a new movie so he comes up with the plot for the movie AIDsquito. This story will later be seen as a trailer on the claymation film.

A friend of View Askew gets a tropical virus from a tsetse fly.

More Gitem Steve Dave tweets are read including the case of the missing FixaDent.

Eugene the Iguana makes an appearance on Impractical Jokers.

TESD debates the levels of sin associated in lying, homosexuality, and sodomy.  Is a little white lie the same as only putting the tip in?

Bry wants to have a bi experience to bump up viewership on Comic Book Men and get those Glee numbers.