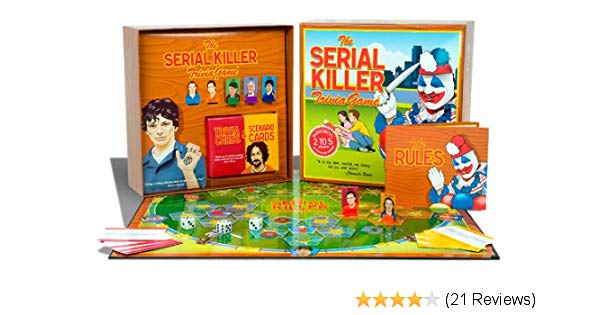 We thank you for purchasing the Cryptozoic Man Booty Time- We were blown away by the support we received from the TESD army of listeners, and can’t thank you enough. As promised, here is the 4th and final TESD Bonus Pod!

“Did you listen to any of it aside from Ming’s bizarre rant about wishing he was a flesh light and you were just getting home from a hard day of work and you could use Ming Light to relax?” – Walt to Q.

“I have you at a disadvantage, I’ve actually killed people” – Bry

“I thought if you had a sore throat, drink urine.” – Walt

A listener sends in a serial killer trivia board game to the stash which gives Walt the idea for the fourth bonus pod:  A good old fashioned family game night.

Walt asks Bry and Q what their most serial killeresque moments were.  Q once fish-napped a goldfish from his neighbors koi pond and returned to the scene of the crime.  Bry once stole a Pot plant from someone in his neighborhood.

Walt denies ever committing a crime.  Bry suggests he’s forgotten about theft by deception against the SunCoast company.

Bry imagines a life where he is lean and mean and he and Stacy Patella go on a Natural Born Killers crime spree.

In the first round of the game Q’s killer token hires an escort to kill.  Walt chastises him saying a real manly killer would stalk his victim not have one sent to his house.

Bryan’s first round has him luring his mother into a trap to murder her.  Bry appreciates the irony.

Walt is just not cut out to be a killer, he gets foiled at every turn.

A trivia question about paraphelia leads to a discussion about an infected monkey and a gay flight attendant who was patient zero for AIDS.

Walt tries to trick Bry into agreeing to go off with an Albert Fish.