Walt defends Bry as an artist, Walt chides Bry for arguing with a little dickweed, Could Q be the most accommodating lover ever?

“Whoa, someone has a Ming tattoo on his back, and it’s not Mike?” -Walt

“Thats the sound of Sunday Jeff fluttering over your podcast grave” – a tweet to Q.

“I was like, ok so they are launching three death stars, and I’m not sure who these Death Stars are gonna kill. Are they gonna kill people who got bad SATs or good SATs” Walt is confused by Winter Soldier.

“… I will buy it on iTunes every fuckin time if it’s available. If I can’t find it anywhere, if I can’t find the CD, it’s outta print, I’ll say ‘Ming, can you find this for me?’ I don’t know how he finds it. I don’t wanna know.” – Walt

Hitler is the mascot for a chicken restaurant. Thailand fashion scene is bustling with Nazi Chic. There is a teapot that looks like Hitler. 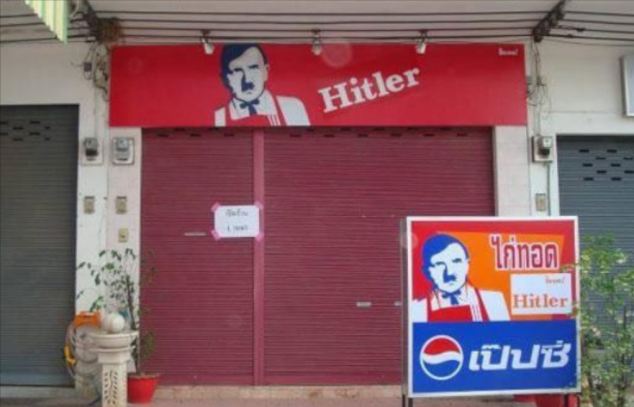 A soundbite from Lou Temple from the Devils Rejects opens the episode.

Q and Bry go to see Dom Irrera in Philly and are asked to sign a fan’s body as a tattoo.

Walt wants an episode of CBM to revolve around Ming’s alcoholism.

Walt takes a pass on Asbury Park comic con despite the Mike and Ming Kareoke Contest being hosted Friday night.

Someone torrented the lost episode 194 of TESD angering Walt, who thinks that if an artist doesn’t think something is up to their standards, who are they to veto it.

Bry gets into an argument with someone on twitter who was unnecessarily bitchy towards him and claims he knows Bry IRL. Bry invites him to say those things to his face when he visits Houston but the internet shit-talker declines. Walt tells Bry he shouldn’t resort to confronting people online and should have better things to do.