I was just surprised racism on Staten Island made the news -Q.

Hitlearn Something New:  Wrapping paper contains hidden swastikas.  A child got a Nazi ring in a prize egg machine. 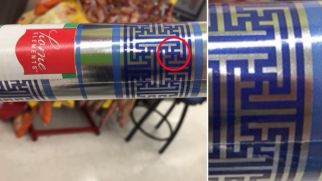 Someone has written “Fuck God” in silver marker on the card table. The boys discuss religion and the Ten Commandments. Q maintains that it’s impossible to follow because the rules are constantly changing and open to interpretation. Walt’s stance on the rules are much more relaxed than most Christians.

Walt admits to stealing the Star Ledger sports section from a super market.

Q agrees with Dick Cheney – Torture IS on the table.

The Eric Garner verdict traumatizes students at Columbia Law School where they need counselling resulting in exams being pushed back.

A Denver City council man named Jeff Garcia writes into TESD as a fan asking for endorsement in the election.

Walt gets very excited about the new Terminator and Mad Max trailers, claims the Star Wars trailer was NOT boner inducing.

Me-undies: Fruit of The Doom