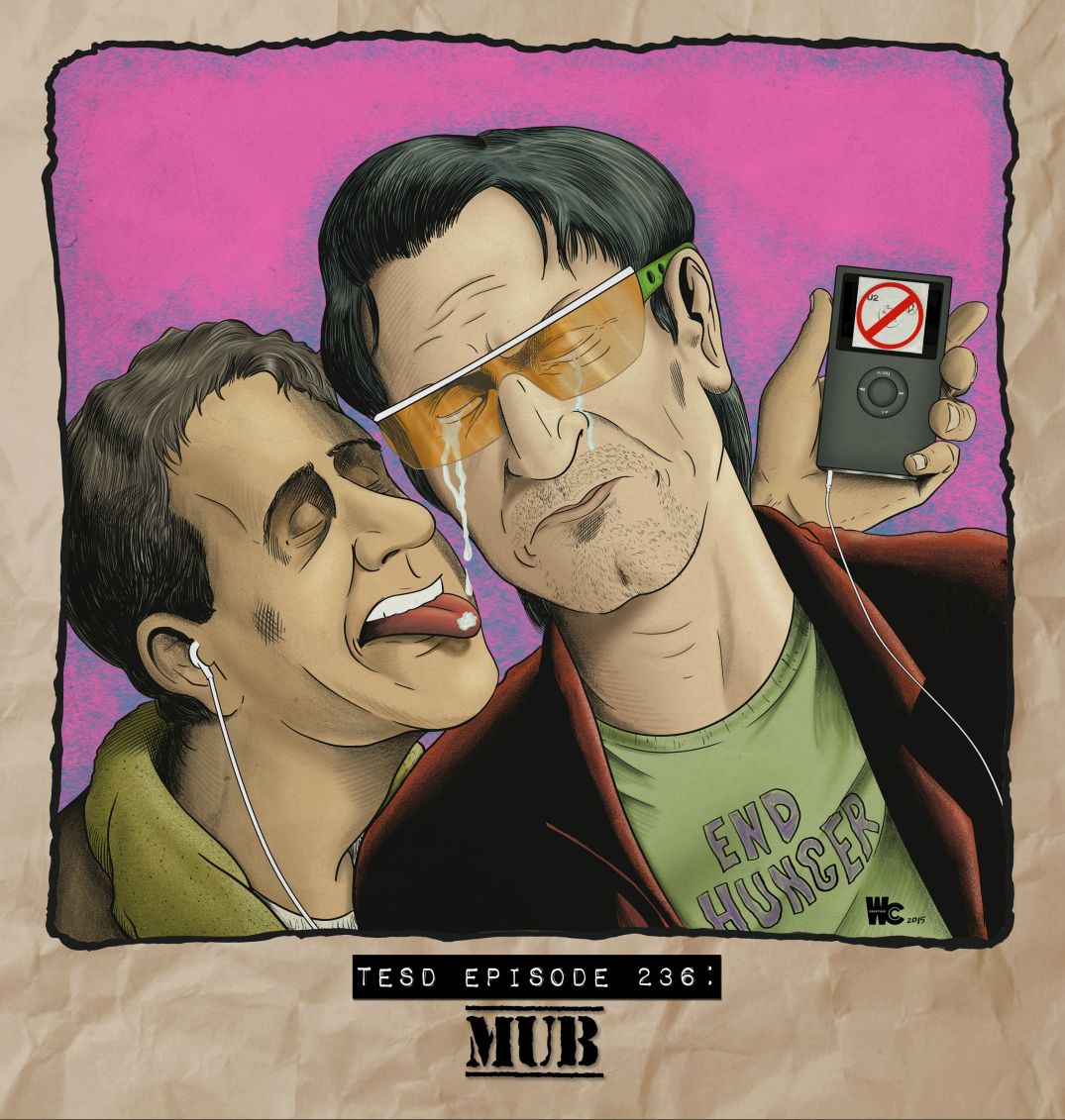 “I was so angry Bry, I said to myself ‘This is what Bry feels like all the time!'” – Walt

“I just wanted to fuckin’ urinate all over people’s faces for ever fucking complaining about getting something for free.” – Walt

“Meeeeh I got a free album on my fuckin’ phone, let me take to the internet to express my malcontent!” – Bry as Chris

“I’ll make them bond in their hatred of their unpaid producer!” – Bry about Mary Elizabeth

An amber alert goes out in the middle of the night sounding like an air raid siren.  Walt is disgusted at the reactions of some fellow New Jersey residents.  One person complained because he had college classes in the morning with some stating they will be shutting off the notices in retaliation.

Walt claims this is as pathetic as the people who complained about getting a free U2 album automatically downloaded to their iTunes.  Bry tells Walt that Chris Laudando was one of the people upset by this intrusion into his music library.  Walt decides that Chris deserves a chance to come on TESD to defend his position and Trial by Fire… Ants is born.

Q reveals that Chris Laudando is the producer of his and Sal’s “What Say You” pod and is putting together the screening of the latest Fast and Furious movie.  Bry brings up their previous manager Mary Elizabeth who got “too familiar” by interjecting in an argument between Walt and Bry.  Walt considers asking Chris to be his producer too.

Walt asks Q to dedicate some free days in the summer so the three of them can go to a County Fair and do some investigative journalism.  This never happens.

Q is excited to interview his boyhood crush Samantha Fox.  Walt and Bry try to get him to ask some hard hitting questions but Q insists it will be a fluff piece.  This reminds Walt and Bry of the time they interviewed Cronos from Venom and it ended up being a ball sucking fiasco.  They never released it because it didn’t feel TESD.

Bry appears on The Walking Deadcast with the guys that started Walker Stalker Con.  The gay kiss between two characters is the talk of the episode.  If Bry was a writer it would have been more explicit.

Q appears on Sgt Kabukiman NYPD’s youtube show put out by Troma.  He wants to talk about a movie idea about a midget gangster that he pitched to Troma years ago.

Bry gets a call from Sage’s school saying that she is wearing an offensive T-shirt.  Apparently Piggy D, Rob Zombie’s bassist, gifted her a skull shirt that says “Blood Suckin’ Mother Fucker” on it.

Bry is considering volunteering to be a traffic warden at Sage’s school.  Walt is worried about Bry having this power go to his head as he tells of the time him and Bry were the safety patrol in elementary school.  They would boss people around, call kids “Mub” and Bry once threw a kid down a hill.

The derisive word Mub is either ‘Bum’ spelled backwards or the first name of Alan Quackenbush’s father ‘Mub’ which according to a song Alan would sing made love to his mother Rini like a turtle dove in a tub.