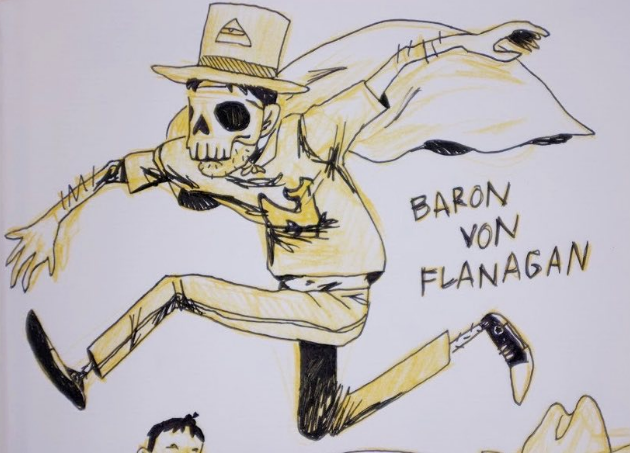 “Would they really knight a minstrel just because he could play that little ukelele good?” – Walt

“Everybody seems to be fuckin in the illuminati but me.” ~Walt

Walt presents Q with Mystery magazines so he does not get caught without an overkill topic again.

Q doubles down on supporting Hillary but Walt begins to see through the facade.

Walt announces he will do whatever it takes to get the chance to join the Illuminati. Bry’s overkill topic is that David Bowie’s death might have been a blood sacrifice from the Illuminati because he declined a Knighthood twice from the Queen, and that his new album Black Star is really a coded warning of the collision of a secret hidden planet with Earth. Prince’s death was also an Illuminati blood sacrifice for going against the music industry.

Walt brings in old copies of the Weekly World News claiming it could hold kernels of truth. A study links IQ to life span, dumb people live longer. There is a town where everyone has X-Ray eyes in Russia after Chernobyl. Q claims he would use his xray eyes to look for tumors, not abuse it looking at girls.

Walt announces his plans for TESD 300.

Bry reads a story of a 10 car pile up caused by Jesus appearing in a Kit Kat.

Bry tells of hikers in Russia who went missing and when rescuers found them they were in various stages of undress and the tents were torn to shreds. This story is later mentioned again in ep 310.

Q is outraged at the diamond suppliers trying to scam the public with the “chocolate diamonds” which are just flawed stones they used to just throw away.