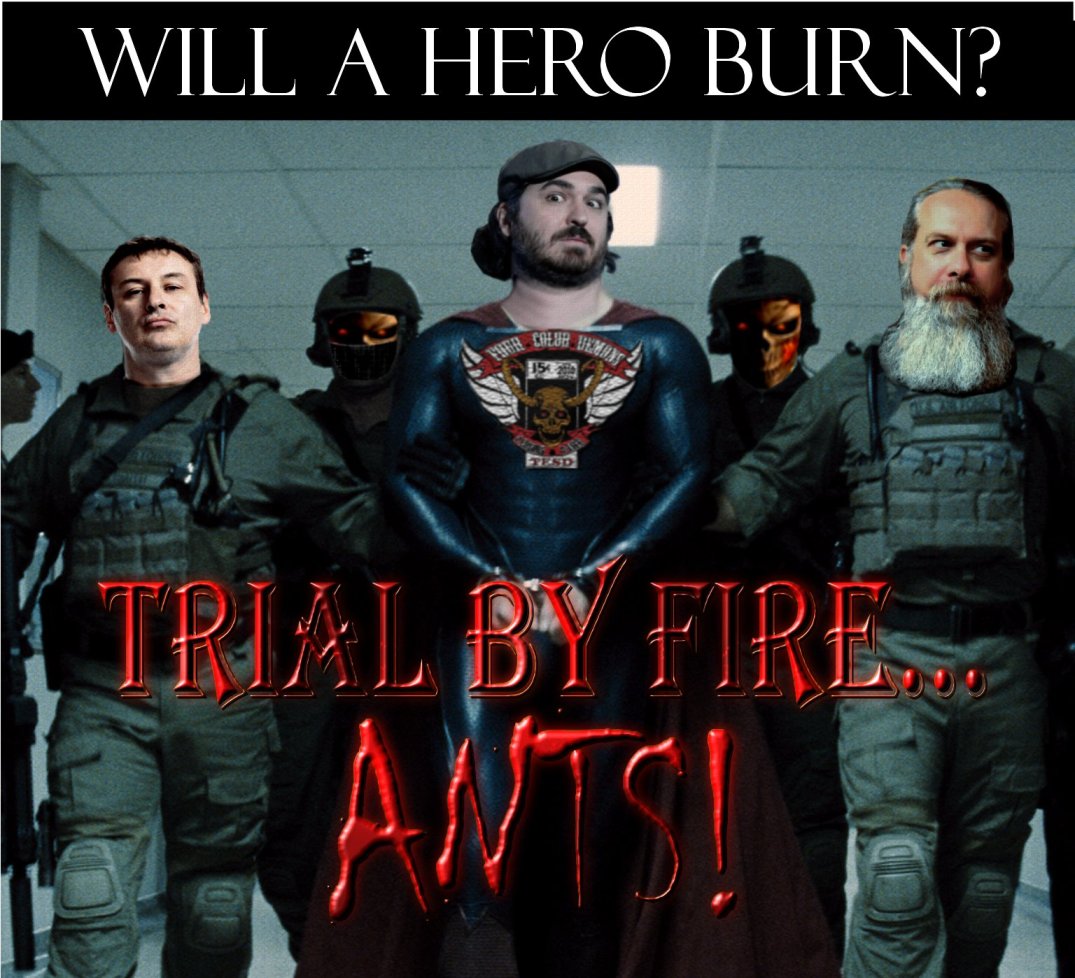 Q is put on trial by Fire…ants for crimes against Reddit.

“Yes, the judge is on pills so you don’t have to file a motion” – Bry

“He shat on Funeralz, bro” Walt

Walt: objection! Your honour, Mr Chen was under the spell of Marshall Manlove when he made those passes at my client.

Git’ Em: I counter he said he was NOT under hypnosis.

Troy: and I counter he is always under the spell of man love.

Even if I did chub up, could you tell? Ming

Bry goes all out in his role as judge wearing a robe and bringing his own gavel.

Judge Bry doesn’t seem to know how plea deals work, blames the loud volume at Lonestar Steak House where he and Walt planned the trial for any confusion.

Troy is there to act as a judiciary expert to help both sides of the precedings.

The prosecution and defense opening statements are filled with gravitas and callbacks. Walt lists Q’s comedic contemporaries, none from the last 50 years.

Prosecution calls the first witness, the commentors on Reddit. Gitem reads their testimonials, highlighting positive comments about himself. The final testimonial is a series of clips of Q making him come across as boastful and out of touch.

Walt calls his first witness, Mike and Ming of I Sell Comics. Mike and Ming lend credibility to how celebrity did not go to Qs head and he remains relatable. Gitem cross examines asking about Ming’s “romantic” feelings for the defendant and plays Q’s “ching chong” song to distract.

Walt’s second witness is Mr. Simmy, who Walt doesn’t question in relation to Q at all and instead focuses on how he thought the idea for Funeralz was terrible but the concept appeared in an episode of Billy on the Street. Gitem cross examines Simmy and demonstrates how Q does NOT know funny by having him say “Hey Mustache Whats up” while holding up a map of Staten Island behind his head.

Walt’s third witness is Sunday Jeff, who maintains Q is relatable and an upstanding guy.  Gitem cross examines asking why he doesn’t watch IJ if Q is so funny.

Walt’s fourth witness is Chris Laudando who provides examples of Q knowing funny but devolves into Roast Mode half way through.