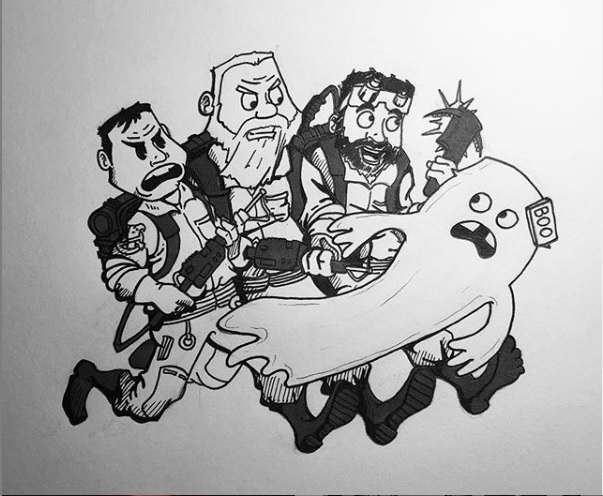 Someone besmirches Q’s beloved Ghostbustahs. Walt ruminates about a life most ordinary.

“He can rape anybody he wan ts, he’s Doctah Petah Venkman!” – Bry as Q

“That’s the Spanish Fly of retail.” – Walt about free shipping.

“Is her name Sally Vulcano?” – Bry

“I don’t care how dusty it is down there, you’ll spread them for free shipping.” – Walt

The episode starts off with a discussion over the movie Joker.  Bry and Q have both seen it.  Walt decided to stay home and watch football instead.  Walt wonders if comic book movies should responsibly be rated R knowing that kids are going want to see it.  Bry thinks that the rating system is outdated anyway since kids can see whatever they want on streaming services and much worse on the internet anyway.

Martin Scorsese has come out saying that Marvel movies are not cinema.  Says they are more like a theme park and shouldn’t be taken seriously.  Walt thinks this is as if Charlie Chaplin came out against the slasher movies of the 80s, he’s too far removed to be relevant.

Burrow came back at TESD after their less than complimentary ad in #421: Retailer Holocaust.  In response Bry reads a very dry verbatim script read for the sponsor.  This ad is later removed and a new version of the episode uploaded without it.

Q is annoyed when someone on Twitter mentioned that his personal idol Dr. Peter Venkman was a sexual predator.

Q say the crew on Impractical Jokers is so cool and diverse but he feels he needs to walk a tightrope between joking with them as he thinks of them as friends but also knows he is their boss and doesn’t want to offend anyone.  He says complaining about Ghostbusters is a fireable offense.

Walt wonders at Q’s exotic life experiences and the wide variety of people he has met and interacts with.  Ming is the most foreign person he knows.

Quinn puts his foot in his mouth at a Comic Con when he asks comic book writer Ed Brisson to draw something for Metro.

Q is living large at a Side Show Collectible personal tour but his ego is brought crashing down when a cute young worker doesn’t know who he is and assumes he has a popular YouTube page.

Walt is dreading Jury Duty and Gitem suggests getting a doctor’s note to dismiss him.  Walt needs to weigh his anxiety of Jury Duty and not wanting to break his No-Doctor streak.