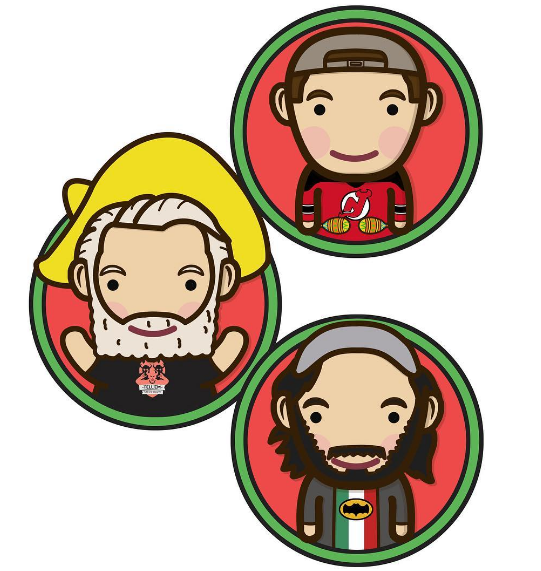 “Most hippies were probably losers though, who just wanted to use the excuse to fuckin’ go get high” – Walt

“Oh get outta here Bryan, fat loser, at least I have a job” – Bryan as Tina X

“Oh no, where would we get our doilies?” – Bry when Walt mentions Tina X’s family business might go under.

Courage My Love gets a lot love from the TESD fan community on line, leading Q to say “Rule number one of being an opening act is you can’t be better than the headliner”

Q asks Walt why Dr. Strange can’t get his own comic book, Walt says no one can relate to a Doctor.

Q and Bry argue about who gets to pick Courage My Love as their nominee for the I Sell Comics contest.  Walt’s pick is Aaron Rads who also put music to his epic birthday song to his wife.  Laudando thinks Courage My Love is emo.

Walt and his family go to the boardwalk to go on some rides and his youngest is just a hair under the height requirement, Walt comes to her defense much to her embarrassment.  Walt accidentally gets another family kicked off when he calls out the ride attendant on letting someone else ride.

Q is pushing for TESD to record a commentary track for Bry’s movie Vulgar.  Walt thinks he means riffing on it ala MST3K.

Back to the Collingswood footage:  Walt is still very nervous about going back to talk to Dennis.  Dennis reveals he has a ‘warehouse’ of 70s comics but denies Walt entrance.

Ming is reprimanded when he tries to sell leftover sodas from Walt’s BBQ.

Tina X keeps shutting down the boys as they repeatedly try to interview her again.  Bry shows her his “rape sticker”.

The guys went to the slot car races.  Q had fun, Walt said it was the most boring hobby he’s ever seen.  The slot car place owner was very smug about the popularity of the hobby and his skills as a racer.

The three finalists of the I Sell Comics contest